Mapping the Path of Consciousness 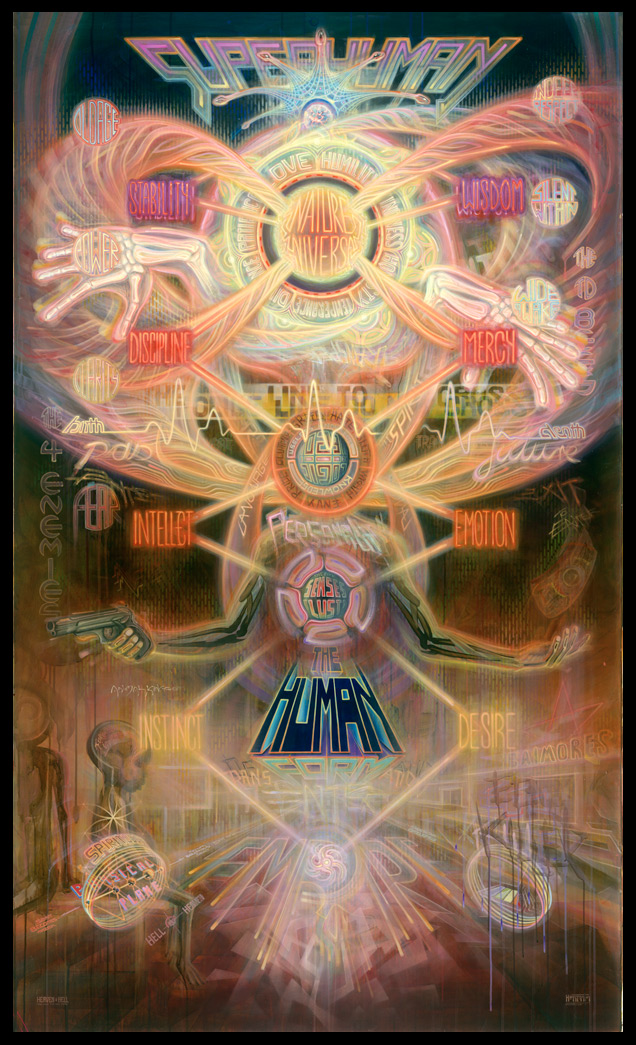 I have always been interested in understanding how things around the universe are interconnected and how man fits into this picture. By blending various religious concepts with my own view of the cosmic principle, the painting “Heaven and Hell” was created over a period of 18 months. 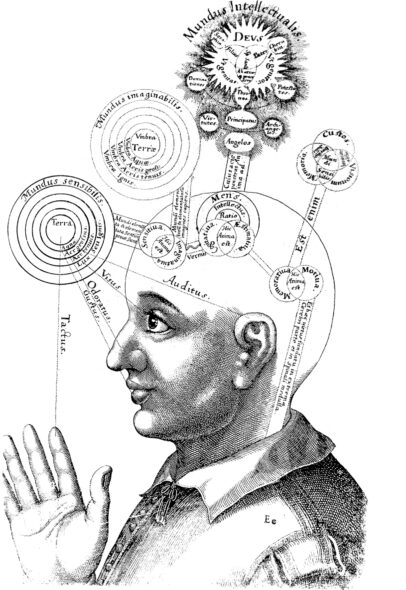 It all started with me trying to visually represent, on one piece of paper, the shamanic worldview as described in Carlos Castaneda’s Don Juan series. I wanted to know if it was possible to illustrate the transformation from a “ordinary” person to a “warrior” (according to Castaneda, a person who perceives an energetic world free from the limitations of his mind and becomes one with it) in a simple diagram. While I was working on the sketch, I quickly realized that the various religions of our world all try to describe the same issues, only the language they use to do so differs. My question then was, would it be possible to unify all these concepts?

I collected the most important and obvious messages of all religious theories and translated them into a modern language. The initial sketch eventually evolved into a concept, which was good enough to be transferred to the big canvas. I began working on “Heaven & Hell” in the winter of 2009. In this early phase of the painting, an artist friend, Greg Pettit, recommended that I look at the “Tree of Life” from the Kabbalah. I had not looked into it before, and I was amazed at the detailed description of the universe that lay in front of me. The Tree of Life coincided in large parts with the diagram I had already developed and gave it the final touch.

In the end, “Heaven and Hell” became a synergy of different belief systems, translated into a modern and understandable language. The painting shows the journey of consciousness, starting from the point where it is manifested into the material world, up to its completion, the highest state it can reach, desribed here as being ‘Superhuman”. The painting illustrates the various levels through which consciousness must pass, in order to reconnect with its own source at the end. Consciousness passes through the animal stage (senses/lust), the self-contemplative (ego/logic) and finally reaches the transpersonal level, where it transforms itself to become one with its source again.

The assumption that it is possible for human beings to escape the eternal cycle of birth and death determines the image, and is the central message of it. “Heaven & Hell” clearly describes the stages of our spiritual growth.

One can recognize two figures in the painting, which are mirrored around the middle circle (ego/logic). These two figures represent one and the same person, which is only represented in two different stages of development. 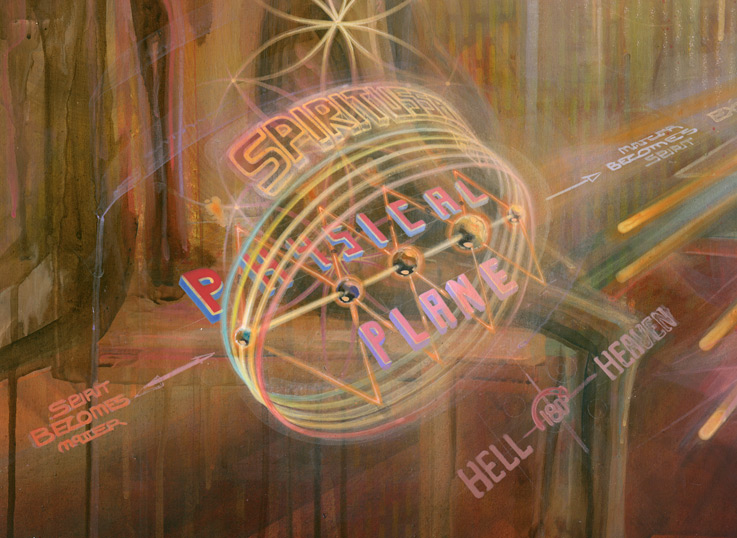 In the lower left corner you can see a small model of the map’s structure. On the physical plane there are five spheres, which represent the stages of development of consciousness. This material plane is orbited and imbued by an immaterial one, the origin of all consciousness.

The entrance of consciousness into the material world is symbolized by the first sphere. In the second, consciousness gets a feeling for its surroundings. The 5 senses develop. The third sphere represents the ego and human logic. Consciousness recognizes itself. In the fourth, consciousness goes beyond itself and integrates the previous two stages into one. The “6th sense” awakens and takes over the supremacy of the mind. The gut feeling/intuition has regained power over “logic”. The inner and outer worlds of the individual merge into a unity of the present, with all that it contains. The fifth sphere symbolizes the return of consciousness to the plane from which it came. The circle is closed. 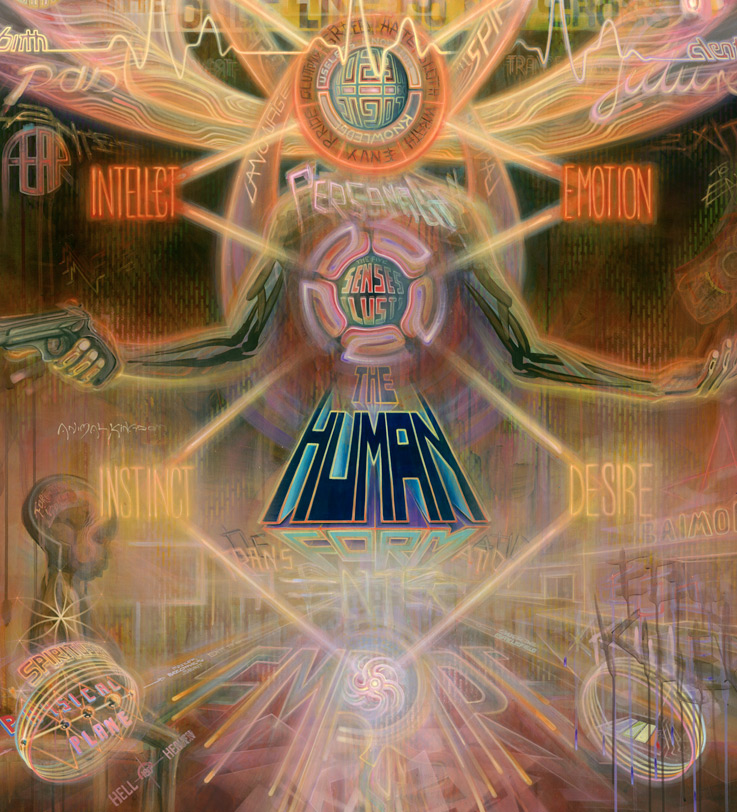 The five spheres are connected by 8 words, which describe the states that you must reach, in order to move up. These are the forces that act in consciousness and change synchronously with its development. Instinct and desire create the sphere of the senses. Instinct becomes intellect, desire becomes feeling, logic and ego are born. The horizontal heart frequency line represents the illusion of time and the inevitability of birth and death in the eternal cycle. The only way out of this entanglement is to be found on the vertical axis, the present moment.

There are four enemies on the path to enlightenment: 1.Fear 2.Clarity 3.Power 4.Old Age. 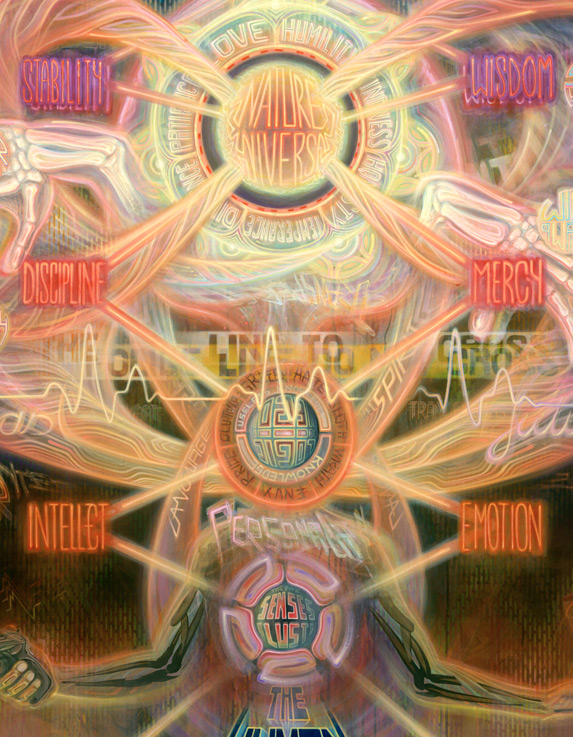 To get beyond the third sphere (the ego), an imaginary line must be crossed. Often referred to as the little death, this is the place where one gives up the sole domination of the ego. Above this line, the world of transpersonality begins. Intellect becomes discipline and ultimately turns into stability. On the other side, emotion becomes mercy and finally transcends into wisdom. 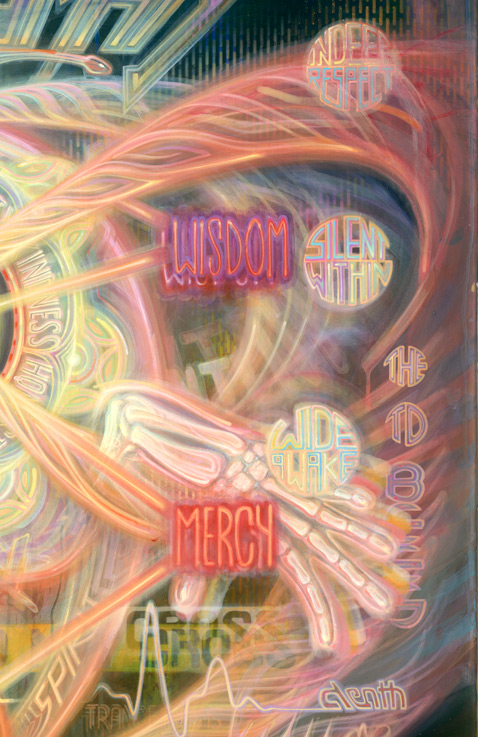 The 3 circles at the right, are states of the mind which tremendously help staying focused on the path: being 1. Wide Awake 2. Silent Within 3. In Deep Respect. 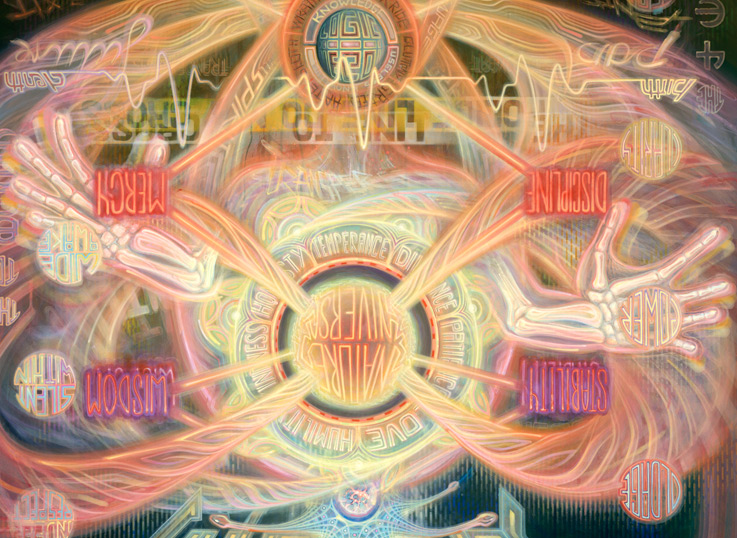 The upper figure represents a human being at play with his surrounding. The 7 holy virtues guide his action, the past and the future expand to the present of the presence of all that is. He is still using his Ego as a tool but it is not his master anymore. Feeling, Trust and Intuition are the driving forces behind his actions. Transpersonality and then, the “Buddha-Nature”, are reached. 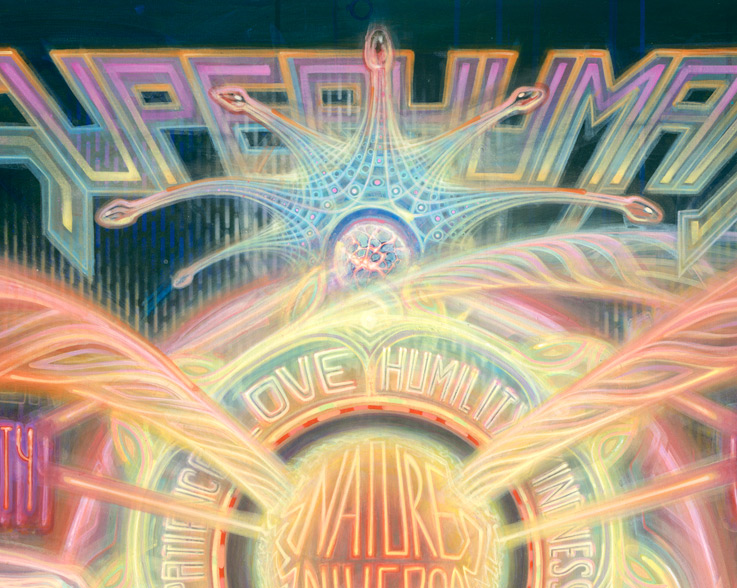